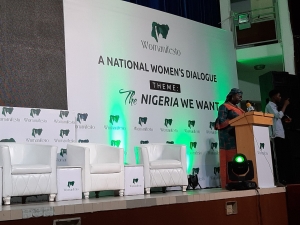 The 2019 National Women’s Dialogue brought together a trans-formational league of women from different ethnic groups, ages and walks of life. This year, it focused on five key areas which are violence against women, women’s peace and security, women’s political participation, women and economic empowerment as well as women’s sexual reproductive rights.

Gender discrimination has been a societal norm, very much evident in Nigeria. According to the OECDs Social Institutions and Gender Index, Nigeria is ranked 46 out of 100 and is among the 10% of countries that exhibit the highest level of gender discrimination. This has played out for many years in politics, job recruitment and even in different forms of gender-based violence.

Following the line of events in the past years, women have collectively fought and advocated for equality, gender rights and protection. Earlier this year, the sad incidence of violence against young women in the #AbujaPoliceRaid gained momentum and further buttressed the need for women’s rights to be protected. Although there have been few good outcomes like the passing of the Violence against Persons Prohibition (VAPP) Act in some states, there is still the pressing need to push for safer society where women thrive. With this in mind, the 2019 dialogue was aimed at redefining pathways to change by developing clear and specific ideas and strategies that can tackle pressing issues such as the under-representation of women, violence, insecurity, and poverty.

The agenda developed is a more encompassing update of the 2005 Womanifesto. With inputs from representatives of all Nigerian Women, the 2019 Womanifesto was developed containing clear and specific asks for women’s development.

The 2-days Dialogue climaxed with a march to the Ministry of Women’s Affairs, where the key demands and 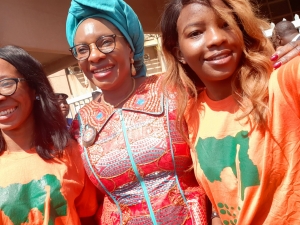 Sarbyen Sheni and Hon Minister of Women Affairs, Pauline Tallen after the presentation of the Charter of Demands

recommendations on The Nigeria Women Want were presented at a press conference to Mrs Pauline Tallen, the Minister of Women’s Affairs. Sarbyen Sheni, EVA’s Program Officer presented the summary of the Charter of Demands to the Minister who committed to pushing the demands to achieve a better society for women and girls.

The success of the women’s dialogue is a great stride for us and Nigerian women at large. The commitment of the minister to push for the key demands gives all women hope that the Nigerian government would prioritize women and protect their rights to be able to reach their full potential and not be discriminated against in the corridors of power. 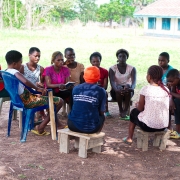 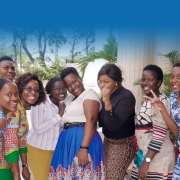 With Her: A Skilled GirlForce - addressing the SRH issues of Adolescent Girls and Young Women.
Scroll to top