Education as a Vaccine (EVA) in collaboration with the Federal Capital Territory Education Secretariat with support from UNFPA hosted an Inter-Secondary School Drama Competition on HIV/SRHR in some selected secondary schools in Abuja Municipal and Bwari Area Councils of the Federal Capital Territory, Abuja with the goal of contributing to the reduction of new HIV infections and 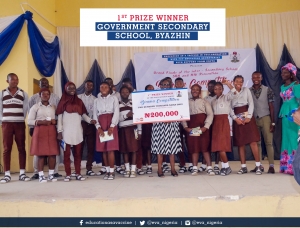 Six secondary schools in Abuja participated in the drama competition. The students worked with their teachers to develop the scripts and act in the drama. The Grand finale was held at Government Secondary School, Wuse on 7th of November, 2018.  The judging panel made up of a young person with HIV prevention expertise and 3 stakeholders representing CSOs and government bodies selected the top three schools for the grand finale. They competed for the grand prize of N200,000 worth of school books, equipment and/or mini project

Nigeria has one of the highest rates of HIV prevalence globally. And in the NDHS survey in 2013, 23% of girls aged 15–19 were either mothers or pregnant with their first child. Nigeria is one of few countries that have translated national policies on comprehensive sexuality education (CSE) as a means of sensitizing adolescents and young people about HIV prevention and reproductive health through the adoption of the Family Life and HIV Education curriculum.

Giving her opening remarks, the Director, Health Unit, FCT Education Secretariat, Mrs, Victoria Aleogena stated that the most important resource we have as a nation is the young people. “If the young people do not learn about their importance in nation building, the country cannot develop”, she added.

She made the students promise that they will all strive to be the best they can be. Drama according to her “is a very important tool in learning, especially because of the didactic messages therein”. She advised the students to be focused, face their studies and prepare to take over from the adults.

As a result of the drama competition, some of the students who had little or no knowledge of HIV prevention and pregnancies had the opportunity to acquire it:

“…I am very glad about the competition. There are some things I didn’t know before that I now know, especially about how a positive person can still live a healthy life” Chidera, 15 years, male.

“… Some of the dramas were very touching, it is sad that this is actually what is happening in our society today. The competition has shed more light on it. I hope that things will change” Salome, 15years, female.

“….I used to think that Education ends when teenage pregnancy happens. It is good to know that a young girl can still go on to achieve her dreams if such should happen to her especially if it wasn’t her fault like in a case of rape”  Amarachi, 18 years, Female

Amidst the celebration by the winning schools, Bem Alugh, Team Leader Individual and Community Capacity Strengthening for EVA thanked the schools for participating and reiterated the organisation’s commitment to continue providing timely and accurate SRH information to young people. He also encouraged the students to imbibe the lessons they learned and encouraged them to be peer influencers to the other students who weren’t present.

The schools who were won are listed below;

“Oh my God, I can’t believe we actually came first. I’m so thrilled. I hope our drama will make an impact as well as help my peers make an informed decision about their bodies. I would also like to thank the organizers of this event for the opportunity they have given to us” – Emmanuel, an SSS3 Student of Government Secondary School Byazhin in excitement.

The HIV prevention and reproductive health sensitization is contributing to the implementation of the National HIV Strategy (2017-2022) and National HIV campaign being implemented in 4 states of the Federation and the Federal Capital Territory.