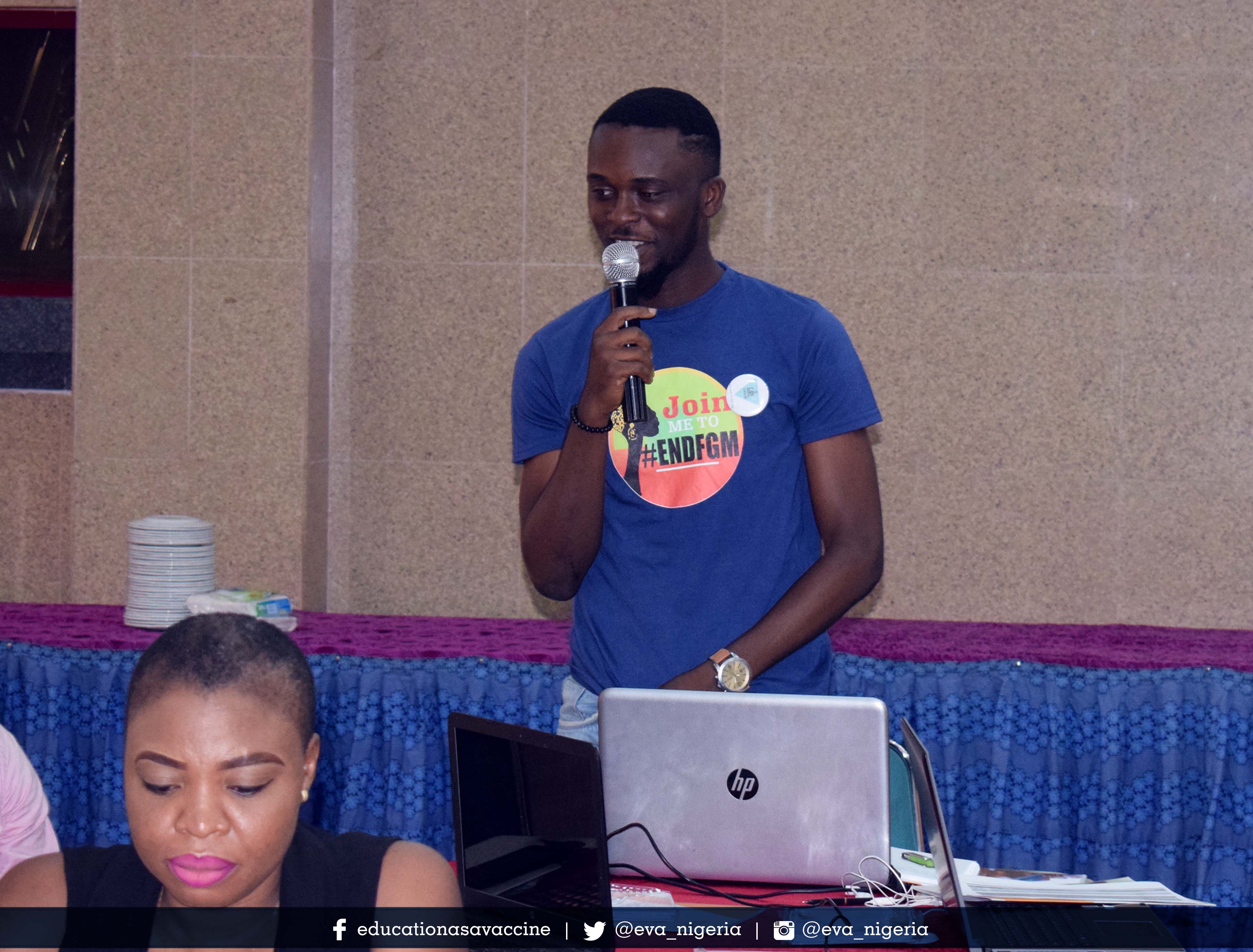 Nigeria has the largest number of instances of Female Genital Mutilation (FGM) in the world with 20 million women and girls reported to have undergone this practice in the country.

The event was organized to bring together organisations implementing projects around FGM to share lessons learnt during the course of implementation and amplify FGM initiatives that have not been shared.

The meeting, which had in attendance youth-led organizations from different states with high prevalence of FGM and other stakeholders, provided a productive discussion aimed at ending the practice in one generation.

EVA has been implementing a project in Osun and Ekiti, using various approaches to building a generation that will no longer condone FGM. EVA’s Program Officer, Itoro Ekanem, suggested intensifying the use of edutainment such as cultural dances, dramas, and video screenings by partnering with community people in order to create impact and drive home the message of eliminating FGM.

Ekanem, was on a panel to discuss “Youth Building Resilience for the Growth of the End FGM Movement: Challenges and Way Forward”. He shared EVA’s program and experiences using different innovations to campaign for the discontinuation of FGM in Osun and Ekiti States.

While responding to the myths surrounding FGM and how to demystify them, Ekanem acknowledged the challenges activists have to contend with while in the field and noted that in order to see change in the practice, “project implementers, as a matter of necessity, need to share with communities different cases and success stories of those that have not been mutilated without any repercussion.”

The current and the most frequently used data on FGM was released in 2013 by Nigeria Demographic Health Survey. Since then, data from FGM projects in Nigeria have not been properly documented, posing difficulties to sharing success stories. He suggested a youth-led data driven approach while using advocacy to push for the adoption of data collected to be used to address issues surrounding FGM.

EVA has been implementing a project in Osun and Ekiti using various approaches to building a generation that will no longer condone FGM. Ekanem suggested intensifying the use of edutainment such as cultural dances, dramas, and video screenings by partnering with community people in order to create impact and drive home the message of eliminating the FGM.

In her opening remarks, the UNFPA Representative, Diene Keita, who was represented by Zubaida Abubakar, noted that the organization was working to build resilience to break the silence surrounding FGM with the vision of ending it in one generation. “UNFPA is building capacities of youth led organizations to end FGM in Osun, Ekiti, Oyo, Imo and Ebonyi states”, she said

Keita reiterated the commitment of the organization to ensure that girls everywhere enjoyed their spectrum of rights. “We will continue to work to ensure that any form of violence against girls, including child marriage and FGM, gets discontinued”, she emphasized.

Nwachukwu Kelechukwu, Program Officer for Girl Generation, identified FGM as a practice deep rooted in social norms of the people, not considered a taboo or a dangerous act that violates human rights. “These people consider FGM a necessary step to raising modest children, communications that emphasize only the health consequences or ‘barbaric’ way in which FGM is carried out risk promoting medicalization rather than abandonment”,  he said.

EVA will take further steps to deepen its activities aimed at putting an end to FGM in our generation, building partnerships for effective and successful programme implementation.