We launched #PASSTHEVAPP, a campaign and exhibition against Gender Based Violence in Gombe State, through our implementing partners VAPP Alliance, on the final day of the 16 Days of Activism, which also happens  to be Human Rights Day.

We mounted 52 silhouette images at the Ministry of Women Affairs and Social Development in Gombe State, representing the 52 young girls and women who were victims of GBV in the form of rape, domestic violence, molestation, and sexual assault, etc. in the month of October 2021. 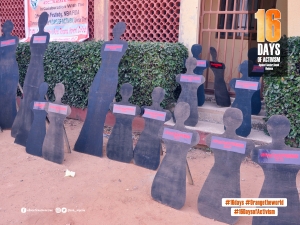 This was an attempt to put pressure on the state’s government and other responsible bodies to pass the VAPP once and for all in the state so that perpetrators could face justice. We believe that the absence of the VAPP, which also means a lack of harsh penalties for perpetrators of GBV, exacerbates the threat.

Gombe State reported a total of 288 GBV cases between June and November 2021, which is only a fraction of the actual number of cases as most cases go unreported. This is the alarming GBV prevalence rate in the state and Violence Against Persons Prohibition Act has not passed despite several advocacy efforts. After the public hearing in August 2021, the bill remains stalled.

Gender-based violence violates human rights that is all too common in Nigeria.
Gombe State was our first target because we had already watered the ground and hoped that we would be able to easily push for the implementation of the VAPP with the campaign.
Mrs. Naomi JJ Awak, Gombe State’s Minister of Women Affairs and Social Development, was present and promised to push for the bill’s quick passage.
We will continue to match at strategic locations in all states that have yet to pass the law, recall, and call out the first names of GBV victims until decision-makers do what is necessary. 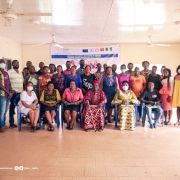 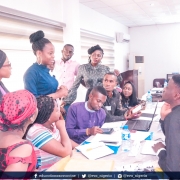