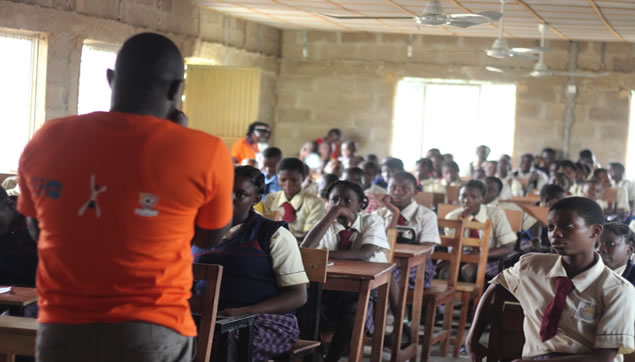 Harmful traditional practices are as a result of deep rooted socio-cultural beliefs and norms.  The presence of laws and policies which criminalize these practices are not sufficient to eradicate it. These laws and policies must be complimented with interventions at community level that mobilizes, inform and educate members of the community on why the practices must be stopped.  Socio-cultural norms which requires long-term approach, can only begin to change when more members of communities believe that such traditions must stop.

This forms the basis of EVA’s intervention in Osun state on #End FGM.  FGM a practice that affects the health and violates the rights of girl child and adolescent girls, is commonly practiced in several regions of Nigeria.  According to NDHS 2013, one in four Nigerian women have been circumcised.  Nigeria has a  FGM prevalence rate of 25%, but Osun state, where EVA programs, has a rate of 77%, being the highest in the country.

In Osun state, Female Genital Mutilation has remained and men have been found to be the major perpetrators of this practice. Education as a Vaccine (EVA) and UNFPA are driving social change through massive community level awareness focusing on men to take the lead to end FGM. Consequent upon this, Education as a Vaccine (EVA) and the Young Men Network against Gender Based Violence (YGMNAGBV), Osun State Chapter with support from UNFPA worked with Osun State actors to increase awareness amongst young people on FGM with the aim of mobilizing communities to end the age long the practice.

“I was told female circumcision is our culture and it makes child delivery very easy but with what  I have seen now, it is terrible” – 13 year female SSS1 student of Great Hephzibal Model College,

“In my community they don’t call it female genital mutilation, they call it Female Circumcision, I was told it is very good for the ladies and makes them not to be following men. But after watching the movie and the discussion that follows it, I now know that female genital mutilation is veryharmful practice that can hurt a girl’s future. On my own I will start advising people in my community to stop the practice”. –17 year male  SS3 student  of Eko-Ende Community Grammar school.

These are some of the reflections from young people, who participated in the film viewing and discussion.  These quotes illustrate how many young people have been socialized to accept the practice as a norm.  It is on this basis that EVA also engaged with communities and their leaders using community level theatre.  These community level sensitization were conducted in six communities of Adejuwon and Owode  in Ede North LGA,  Eko-nde and Iba  in Ifelodun LGA as well as  Owode-orolu and Idi-Iroko  in Orolu.  Communities are now taking the lead to ensure that FGM is no longer accepted as the norm by making public declarations and put up social sanctions to stem the practice.

“It has become a taboo for anyone to mutilate or facilitate the process of mutilation on any girl child in this Community, myself and members of my council have taken it upon ourselves to see to it that FGM is stopped in our community”.– King of Eko-nde HRH Abdul Rafiu Olaniyan Ajiboye

The five month long campaign was able to successfully educate and engage over 600 adolescents and young people between the ages of 10-24 people and 5000 adults in six communities.  Plans are already in motion to scale-up similar campaigns to other parts of Osun state to end the harmful practice.  As perfectly put by a school principal “Any aspect of culture that brings much harm to girls and women and must be stopped”, a goal that EVA is actively striving for.